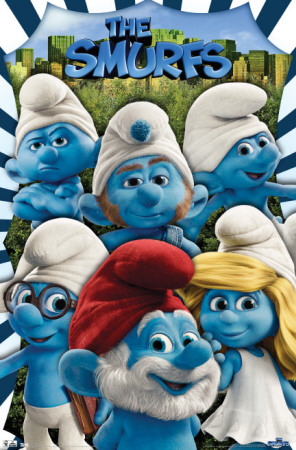 The smurfing film you've smurfed your smurfing smurf for.
Advertisement:

A Live-Action Adaptation of the Belgian comicbook The Smurfs, released on July 29, 2011. The story focuses on six of the Smurfs (Papa, Smurfette, Brainy, Gutsy, Clumsy and Grouchy) who get transported via a magical portal to modern day New York City after the evil wizard Gargamel manages to finally locate their village. Once there, they run into a young couple, Patrick and Grace Winslow (Neil Patrick Harris and Jayma Mays), who act as their Secret-Keeper until they can figure out a way to return to their own world. Unfortunately, Gargamel and his cat Azrael have also managed to find their way through the portal, and his scheme of using the Smurfs' essence to make his magic dangerously powerful may come to fruition unless they can Smurf him back.

The film is notable not only for being a Human-Focused Adaptation (though to a much lesser extent than you'd think from watching the previews), but also for containing some of the most brazen uses of Product Placement to date. It was intended to be the first in a trilogy of movies, with its first sequel released in 2013 and its second to be released in 2015. However, due to the performance of The Smurfs 2, Sony decided to cancel the third movie and instead reboot the series as an all-CGI animated movie series with the first movie Smurfs: The Lost Village released in 2017.

The movie was released with The Smurfs: A Christmas Carol as part of the 3-disc DVD/Blu-Ray bundle.