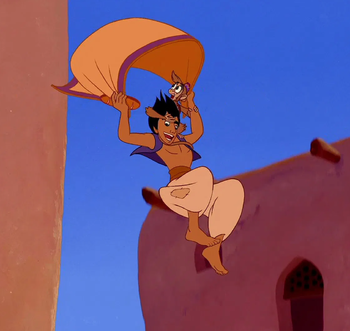 If you're not a cartoon, using a carpet as a parachute will kill you.
A character is falling from a great height and has no conventional parachute. What to do? Improvise with something else! Usually it's an article of clothing, though a Rubber Man can make themselves the parachute.
Advertisement:

Please Don't Try This at Home unless you are, yourself, falling from a great height and have no parachute.

And the award for "World's Most Embarrassing Parachute" goes to...

And the award for "World's Most Embarrassing Parachute" goes to...