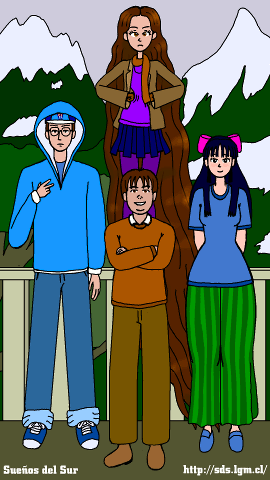 is a Slice of Life webcomic written and drawn by Luis "Locoluis" González. Originally written as a series of doodles in the author's notebooks, Sueños del Sur started to be published as a webcomic in October 2007. Since then, it has been updated slowly but mostly steadily, though with a few breaks in between. The webcomic appears to currently be on hiatus as of April 1, 2020.

The story is centered about the daily life, friends, adventures and dreams of the Martínez Gómez family, specifically their four chidren, Hugo, Rosa, Eliana and Pedro. They live in a small coastal town in central-southern Chile.

The webcomic is published in Spanish and English at http://sds.lgm.cl/