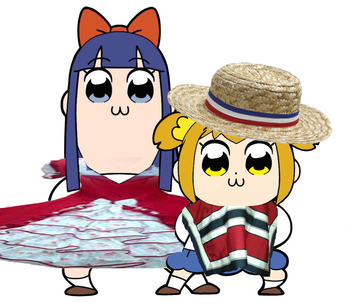 In Chilean and qué weá?
Qué chucha, weón?note Chilean version of "What the fuck, dude?"

Pop Team Epic en Chileno is a Chilean Gag Dub and Abridged Series based on the eponymous anime and manga by bkub made in 2018. More than just a Spanish fandub adaptation, this goes further into the territories of Accent Adaptation (all the gags are in Chilean Spanish), Cluster F-Bomb (a lot more than the source) and local Memetic Mutation (with even more references the series already has). Also, all the voices are male ones and the inbetween spaces with the logo varies between the name of the anime randomly in Japanese (Poputepipikku) and English (Pop Team Epic) titles, and diverse quotes from Chilean memes and viral videos.

Every episode lasts 4 minutes and contains gags from different anime episodes, in all of them having at least one from Bob Epic Team. Until now, there're nine episodes released, two specials (the ReDub episodes, one of them with female voices) and one compilation (the Bob Epic Team episode made for the first anniversary). Also, there're some translations of the Four Koma (in Chilean Spanish, of course) and a couple of meme images made exclusively for the site.

, too. Also, some episodes (the first five and the ReDub) were uploaded to Dailymotion in this playlist