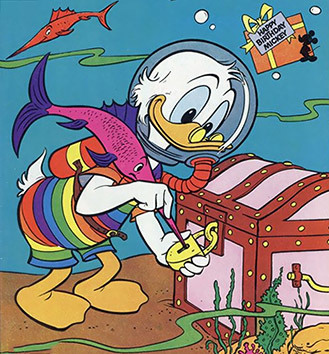 Not everyone has a lockpick on hand when they need it. Whether due to the difficulty of obtaining lockpicks, the possible embarrassment of being caught with one, or simple unpreparedness, a character might be forced to confront a lock with only only whatever supplies happen to be at hand. Fortunately, in fiction, anything can serve as a lockpick. A character might take it even further by using something that couldn't turn the lock or even fit inside it in real life.

Note that in Real Life, in order to pick a standard pin-tumbler lock, two tools (rather than one as is often portrayed) are needed; a torque wrench and a pick. The torque wrench is used to turn the cylinder, while the pick is used to manipulate the pins in such a way to allow it to turn. A flat headed screwdriver can substitute for one. In addition, a screwdriver can also be used to force the lock (literally just twist it hard enough to snap the pins) or rake it (drawing it across the pins in a particular way until they snap in place).

Related to MacGyvering, especially when people get creative in their improvisations. Shapeshifters and characters benefiting from Toon Physics might also be able to turn parts of themselves into keys or lockpicks, in a Mundane Utility alternative to Shapeshifter Weapons.

Tai Lung uses a feather to pick the lock on his restraints with his tail, releasing the acupuncture needles.

Tai Lung uses a feather to pick the lock on his restraints with his tail, releasing the acupuncture needles.