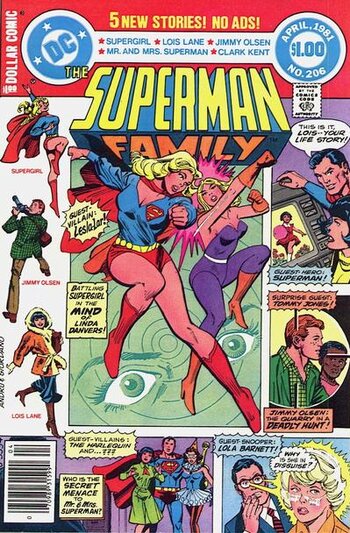 Strangers at the Heart's Core is a Supergirl storyline started in 1977 and published in Superman Family issues #183-189, #191-195 and #206. Written by Jack C. Harris and Gerry Conway, it solves several subplots which had remained untied since the early 60's.

Supergirl is being hounded by a wave of villains who seem strangely fixated on her. She has never met them before, but they are obsessed with taking her down; seem to know too much about her secret identity, her daily life and even her family; and some of them own technology which they are not intelligent enough to develop, let alone build.

All of them are being unknowingly manipulated by an enemy of Kara Zor-El's past whom Supergirl has long forgotten. Someone who was supposed to be dead, but whose ghost has spent one decade and one-half surviving, increasing their power, and wallowing in hatred. Someone who is determined to destroy Supergirl one or another way, manipulating unwitting pawns and causing chaos, confusion and destruction from the shadows.