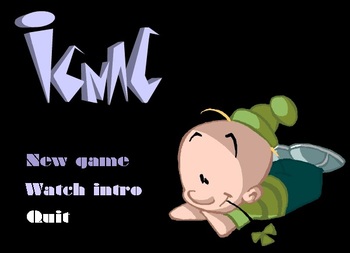 A 1998 short freeware Point-and-Click Room Escape Game developed by Igor Sinkovec in Klik & Play, inspired by adventure gaming classics like Day of the Tentacle and Sam & Max Hit the Road.

The plot revolves around a boy called Ignac who has been locked up by his parents as punishment for his bad math grade, and has to find a way to escape the house.

is also available. It was to be followed by a sequel Ignac 2

, as well as the animated series Ignatz

; however, it remains to be seen whether these plans will ever come to fruition.