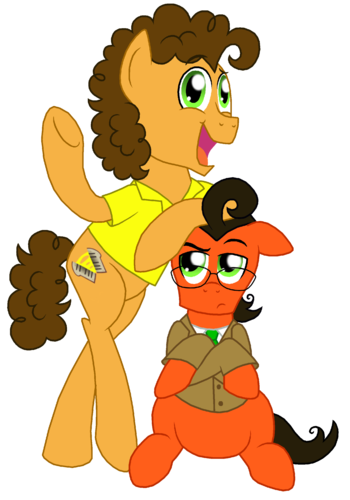 A series of stories by Sketcha-Holic

revolving around Cheese Sandwich and his younger brother Tomato Sandwich. Is considered the main 'verse counterpart to The Rock Farmer's Daughters.

The entire premise of the series is how the two brothers had been best friends in colthood before multiple stressors—including Cheese's social anxiety and resentment of his situation, and Tomato's Innocently Insensitive and klutzy nature—drove a wedge between them and left them embittered toward each other. Shy Cheese grew up to be a cheerful party pony, while hyperactive Tomato grew up to be a grumpy business college student. And when these two collide, there's no telling what would happen.

Stories in the series include:

—The first story chronologically, though one of the later ones written. A series of events that happened in the colthood of the brothers and an establishment of their bond, starting with the day Tomato was born.

—The first story written in the series, having served as the official introduction of little Tommy Sandwich and a brief look at their relationship when they were little.

It Broke the Camel's Back

—A piece about the catalyst that made Cheese decide to run away. Also the official introduction of adult Tomato.

We Used to Be Best Buddies

—A oneshot based on "Do You Want to Build a Snowman?" from Frozen, about the years when Cheese took to shutting himself away from Tommy, who only wants Cheese to show his friends just why he thinks Cheese is the best big brother. Includes Tomato's reaction to Cheese running away.

—The first multi-chapter in the series, it's the story of when Cheese and Tomato happened to be in Ponyville at the same time, and shock Pinkie Pie with their Sibling Rivalry. This prompts Pinkie to force them to spend ''brotherly bonding time" together, with disastrous results. However, the disaster makes them realize that they were being foolish, and they bury the hatchet.

—In an attempt at rekindling the same bond they had in youth, Cheese takes Tomato on a summer road trip around Equestria. During the trip, Cheese juggles his big brother role and his party pony role, inadvertently shooting himself to a path of self-destruction, while Tomato deals with insecurities that had been sown since Cheese had left, trying to find a balance between his silly side and his serious side.

, which fleshes out his character more and shows off more of his quirks and interests, as well as some cute flashbacks to the Sandwiches' younger days. It also fleshes out his friends as well.

This 'verse includes examples of: