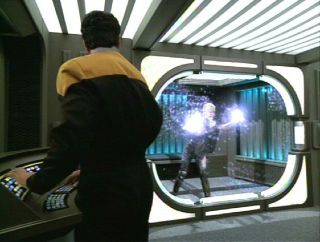 Keep it down in there! We barely have enough budget to reuse old Special Effects!
"I just wanna get it on record that using force fields for doors in a space prison... is a bad idea. You know what would have been better? Regular doors, with locks! Locks that don't open when the POWER goes out!"
— Space Warden Cave Johnson, Portal 2
Advertisement:

A standard way to bar entry or exit for characters in Speculative Fiction is to use a Force-Field Door. It may be made of Some Kind of Force Field, glowing bars of Pure Energy, concentric Instant Runes, or what have you. If touched, it may harmlessly shock or dematerialize the appendage doing the touching. Sometimes, especially if the field is invisible until touched, it leads to amusing situations where characters run face first into the field.

Aside from Rule of Cool, the advantage of such a setup is usually that it is immune to physical attack, or that it can contain Starfish Aliens that could phase or shape-shift their way through ordinary doors.

Of course, the flaw in this immaterial marvel is it usually requires an outside energy source, or can be interfered with by using powerful ECMnote Electronic Counter Measures or MCM.note Magic Counter Measures So the hero can traipse past these obstacles by pulling the proverbial plug on it. Worse is when the outside energy source is on the outside of the Force-Field Door, making disabling it as easy as beating up some guards and blowing it up.note Which may actually be a challenge if guarded by Elite Mooks or the like. Or blowing a hole in the wall on the side, whichever is easiest. For some reason, the jailers rarely use physical doors outside the field (or wrapped in the field) as a backup in case of power failure.

This item is available for purchase thanks to Trope Co.®

There is a small amount of justification in this trope. Force-field doors are very easy to use when you actually want to release someone at some point. Regular doors are just as vulnerable to blowing a hole in the side of the room. Having a system that fails open or fails closed is very much dependent on what you want the system to do.