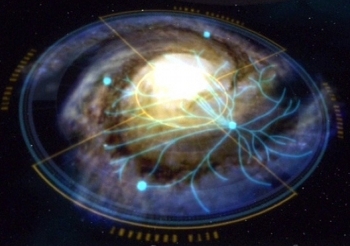 Get on Intergalactic Route 17 and hang a left on the 1st exit to reach Earth.
Advertisement:

So, you have Faster-Than-Light Travel, and you want to travel to Rigel, but first you have to stop through Tau Ceti, even though you don't have any business there, and stopping there makes the journey longer. Why is this? Whether due to some law of physics, some artificial regulation, because FTL travel is dependent on some manner of gate(s) or stabilizer(s), or simply because Hyperspace Is a Scary Place, you have to follow the Hyperspace Lanes.

Hyperspace Lanes allow space to have choke points and pace the story in space since you have to make stops along the way between jumps anyway. This also helps facilitate Hyperspeed Ambushes and Space Piracy as predictable avenues of faster-than-light travel make for planning attacks on enemy fleets or unwitting travelers much easier. For lanes that are created by a series of structures, this also allows opportunities for an ambusher to sabotage the system and force their target out of FTL when they aren't expecting it. These lanes typically connect only the closest systems to each other. Not as silly as might be expected, as the stars of a galaxy are always in motion and even the tiny pull of distant stars may bring a ship seriously off course at great distances. Having a few lanes for which the movement and gravity of nearby stars is extremely well mapped out might be a lot safer than just blazing straight through a star cluster whose gravitational effects are only reasonably well estimated.

Related to, but rarely overlaps with Portal Network, typically only if any given gate is limited in terms of potential destinations. Sub-Trope of Faster-Than-Light Travel, and the sci-fi equivalent of Stay on the Path.