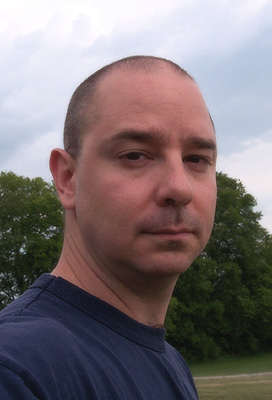 "Dirk Moeller didn't know if he could fart his way into a major diplomatic incident. But he was ready to find out."
— Opening sentence of The Android's Dream
Advertisement:

John Michael Scalzi II (born May 10, 1969) is best known for taping bacon to his cat

, though his science-fiction writing comes a close second.

. He also wrote The Shadow War of the Night Dragons, Book One: The Dead City

. It's an April Fools' joke. That was nominated for a Hugo Award.

Scalzi was a creative consultant for the TV show Stargate Universe. He has also written audiobooks (The Dispatcher series), serialized e-books, and four collections of his essays from his blog, Whatever.

Scalzi has won dozens of awards, is frequently on bestseller lists, and received a well-publicized large contract from his publisher in 2015 covering 10 years and thirteen (!) books. He is a former president of the Science Fiction and Fantasy Writers of America. In his younger days he was known for being Extremely Online and a frequent target of trolls. He still maintains an active Twitter account

Four of his short stories, "When The Yogurt Took Over: A Short Story", "Missives From Possible Futures #1: Alternate History Search Results", "Three Robots Experience Objects Left Behind from the Era of Humans for the First Time", and "Automated Customer Service" were adapted into individual episodes of the animated anthology Love, Death & Robots.

Works by John Scalzi with their own trope pages include:

Other works by John Scalzi provide examples of: