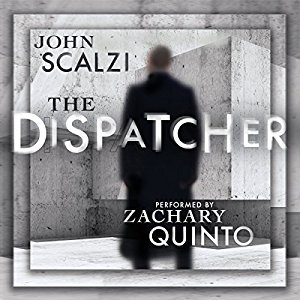 The Dispatcher is a series of audio novellas, written by John Scalzi and narrated by Zachary Quinto. The first audiobook was released by Audible Studios for free on October 4, 2016, until November 2, 2016. It has since been released in e-book and print formats.
Advertisement:

The novellas deals with a world, where Resurrective Immortality has existed for about a decade now, even though no one knows how or why. The only thing that is known is that anyone (well, almost anyone) who is intentionally killed by another person vanishes in a puff of air and reappears in their home, naked but alive, their body restored to its state from several hours prior to the death. Anyone who dies of natural causes, suicide, or accidents is dead for good. This has resulted in the creation of government-sanctioned Dispatchers, whose job is to kill (or "dispatch" in their lingo) people near death (e.g., due to a failed hospital treatment) in order to give them another chance at life.

Tony Valdez is a licensed Dispatcher, who is content with his work killing people to save them. Then he is approached by a police detective, who explains that a colleague of his has been, apparently, kidnapped, which may be related to an off-the-books job he has done. Valdez, who is no stranger to the gray area of the Dispatching profession, tries to track down the other Dispatcher before he expires.

In 2020, Scalzi released a sequel titled Murder by Other Means, continuing the story of Tony Valdez. The sequel picks up two years after the first novella, with Tony hit by hard times thanks to budget cuts by the city of Chicago, with many of his regular gigs drying up. Tony does an off-the-books job for some quick cash and goes to deposit the money to his bank when the bank is robbed.

The novella contains examples of the following tropes: