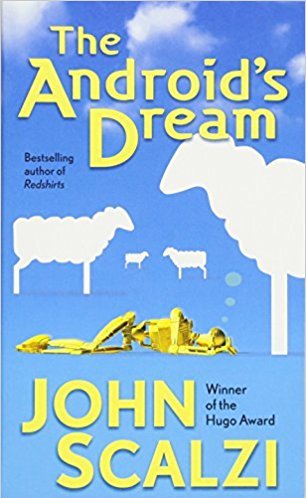 The Android's Dream is a 2006 science fiction novel by John Scalzi.
Advertisement:

20 Minutes into the Future, Earth and its colonies are a low-ranking member of the Common Confederation, a multi-species galactic political union, similar to the old United Nations, having completed its probationary period only a few decades ago. Among humanity's trade partners and military allies are the Nidu, a reptilian empire with a strict hierarchical clan-based social structure. The Nidu themselves are seen by most CC members as a Third World nation, but humanity is an even weaker Third World nation.

During routine trade negotiations between the United Nations of Earth and the Nidu, a human diplomat kills a Nidu dignitary in a very... unusual manner, himself dying from a heart attack moments later, brought on by an unhealthy lifestyle coupled with a hysterical bout of laughter. The Nidu ambassador to Earth informs the UNE government that the only way make things nice between the two races is to provide the Nidu an extremely rare breed of genetically-engineered sheep, called the Android's Dream, for the coronation of the new Nidu Fehen. Without the sheep, the coronation cannot proceed, and the resulting infighting among the Nidu clans will likely spill over onto Earth and its colonies. The coronation is set to take place in a week, giving the government very little time in which to find and deliver one of the rare sheep.

Ben Javna, an aide to the Secretary of State Jim Heffer, is tasked with finding the sheep, while keeping the whole thing under wraps. Ben asks an old childhood friend, an ex-soldier named Harry Creek, to do the search, as Ben himself is too high profile a figure. Harry, with the help of an AI made from a digitized copy of the brain of Brian Javna, Ben's younger brother and Harry's best friend, who was killed in battle years ago, starts looking, unaware of just how many players are involved in this particular interstellar game.