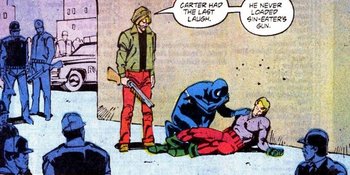 A depressed or desperate individual wants to end their own life, but, for various reasons (a desire to make a point, insurance, programming, or moral aversion to suicide), is not willing to do it themselves.

Instead, they engineer a situation in which someone else will be forced to do it for them. The "classic" scenario involves a criminal indiscriminately attacking Innocent Bystanders or police so that they will be forced to shoot. More sympathetic characters, however, will simply pull an unloaded gun or realistic toy gun on a police officer and hope they respond with lethal force. In real life, it is fairly common: at least one study showed that about a third of officer-involved shootings in the US are suicide-by-cop attempts (the numbers might be substantially off — statistics on officer-involved shootings in the US are notoriously sketchy — but the numbers probably aren't that far off and the point that this is surprisingly common still stands).

It could be broadly applied to any situation where a character attacks specifically because the expected reaction from the relevant authorities will cause the desired outcome, such as a Cold War scenario in which a megalomaniac United States general attacks the Soviet Union because the Soviet counterstrike would kill him (and a few million others, but who's counting?).

It's also possible to commit it accidentally — Shoot Him! He Has a... Wallet! is unfortunately Truth in Television. Avoiding this is why you never touch or move threateningly at a police officer, you never make movements that could be seen as reaching for a weapon around cops, and why you never brandish or carry a prop or fake weapon (much less a real one) in a way that suggests immediate use when one could possibly come into contact with police. (If you carry fake or prop weapons in public, you're advised to make them look safe at first glance with proper paint/markings/other "safety bonding," and openly carried firearms in areas where it's legal to open carry should be holstered in closed holsters.)

The Up to Eleven variant of this trope is Suicide by State, in which the person commits a crime which bears the death penalty and gets executed. This has really happened in Real Life — it was a popular method used by really desperate Scandinavians and Germans in a time when suicide was considered an unforgivable sin. By killing an innocent child, it was figured, both win; the child is innocent and goes to Heaven, you get to repent and prepare for death, and in the end the state lops your head off or hangs you or whatever and everyone "wins".

Compare My Death Is Just the Beginning, where the death is part of an ongoing plan; if it's the end result, it tends to be a Thanatos Gambit. See also Death Seeker for a character built around this. Criminals who declare that they're Never Going Back to Prison are particularly likely to do this. When you send someone else to get killed (by the police or any other armed force), it's The Uriah Gambit. This is related to I Cannot Self-Terminate.

This is a Death Trope, so expect spoilers.