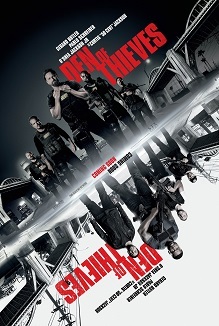 Nick O'Brien (Butler), a detective working in the Los Angeles Sheriff's Department, is tasked with investigating a armored car robbery committed by Ray Merrimen (Schreiber), a former Marine who has assembled a group of thieves to take high-score robberies.

In the pursuit of Merrimen's crew, O'Brien and his unit of elite cops eventually track down and detain Donnie Wilson (Jackson Jr.), a bartender who acted as a getaway driver for the robbers, but in the absence of information, Wilson is released and rejoins Merrimen and the others to plan a much bigger operation — the robbery of the city's Federal Reserve.

As O'Brien and the other cops close in on Merrimaen's crew, they enact a series of distractions and tricks to steal $30 million in bills from under the noses of the authorities. However, nothing is as it seems, and before the dust settles, someone will have a few tricks up their sleeve...

Den of Thieves contains examples of: