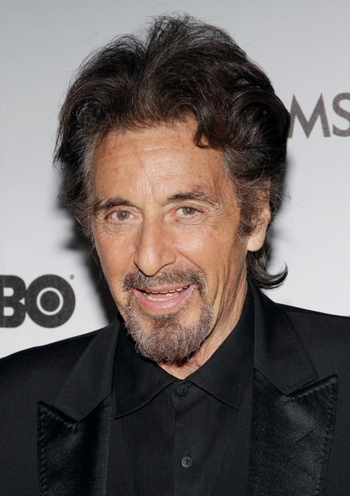 Say hello to his little friend!
"You need some insecurity if you're an actor. It keeps the pot boiling."
Advertisement:

Alfredo James Pacino (born April 25, 1940) is often regarded as one of the greatest actors in American film history.

He was born to Italian-American parents in New York City. Despite a difficult childhood in an impoverished neighborhood, he pursued his dream of becoming an actor and was almost instantly recognized as a natural. After taking roles of varying prominence in several on- and off-Broadway plays, he caught the eye of Francis Ford Coppola while on the set of the film The Panic at Needle Park. Coppola fought tooth and nail to get Pacino in the role of Michael Corleone; competitors for the role included Robert De Niro (who went on to play Michael's father in Part II), Jack Nicholson, and Dustin Hoffman. Pacino was acclaimed, and the rest is history.

He often stars in gangster and cop films and is frequently compared to De Niro. He also maintains his Broadway career, though most aren't aware of it. Pacino's memorable roles are Michael Corleone, Sonny Wortzik, and Tony Montana. His performance as Michael Corleone, particularly in the sequel, is legendary and considered one of the greatest film performances ever.

He has been nominated for an Academy Award nine times in his career, winning Best Actor for his performance as Lieutenant Colonel Frank Slade in Scent of a Woman. He's also won four Golden Globes, two Emmys, two Tonys, and a BAFTA.

Example of:
Kiss of Death