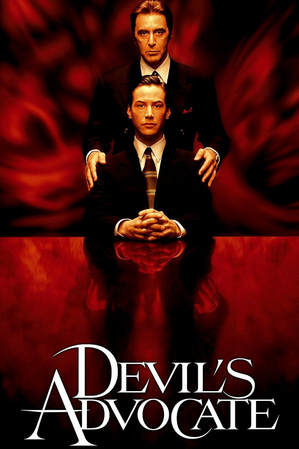 Kevin Lomax: What are you?
John Milton: Oh, I have so many names...
Advertisement:

For the trope, see here.

The Devil's Advocate is a 1997 Thriller / Religious Horror film directed by Taylor Hackford, starring Keanu Reeves, Al Pacino and Charlize Theron, and based on a novel by Andrew Neiderman.

It follows the career of a lawyer, Kevin Lomax, as he gets entangled with the demonic forces that are helping him on the road to success. He ultimately faces off against the origin of this positive influence and the horrors of his own origin.

Of his many names, Al Pacino prefers Dad to Satan.

Example of:
I Have Many Names

Of his many names, Al Pacino prefers Dad to Satan.