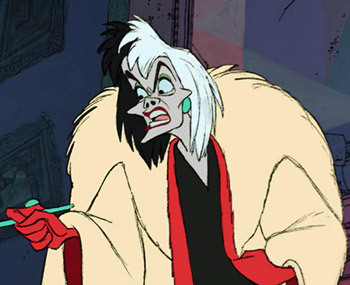 That coat might as well be the mark of the beast.
"I love this fur coat, especially since I killed the animals for it myself!"
— Princess Snake, Dragon Ball Z Abridged
Advertisement:

If you wear real fur, you must be evil or immoral. That's the only explanation.

This is not about the politics of wearing fur, but simply how the mainstream media has portrayed it since the mid-1980s. In that time, groups such as PETA finally gained some traction, through celebrities building up a Band Wagon Technique. Wearing animal fur was considered the mark of evil. Leather is usually given a pass since the rest of the animal was killed for meat anyway, and as Terry Pratchett put it, "would you tell a 300-pound biker to give up his jacket?"note someone did...

Fur industry revenues went into a decline through the late '80s and '90s, but this didn't last long. Some other celebrities came along later decided to rebel against the curve, particularly rappers and hip-hop artists. Combined with sites like eBay marketing inexpensive furs, fur has seen a comeback in recent decades. Just go to photo sharing sites and look up "Fur coat," "mink," and even "pimp coat."

Of course the media doesn't reflect this. Partly because it's Still The Eighties, and partly to satiate the remaining anti-fur celebrities, mainstream media since the mid 1980s has an unwritten rule about fur: it's a sign of corruption. Not the fur itself (barring bad horror movies), but of what you did to get it.

So wearing fur in media has now become a Stock Costume Trait, often to show how corrupted characters have become. Wearing fur identifies you as:

It should be noted that cavemen, Native Americans and Arctic tribes like the Inuit never wear fur, they wear skins, so it's all right, since it makes you Closer to Earth as a culture. Note that in Real Life, Inuit and northern Indians actually do wear fur in modern days, and not the synthetic kind which doesn't retain heat as well. Political correctness goes out the window at 40 below. Same goes with Russians, who aren't politically correct people in general but are baffled by this trend especially and tend to think anti-fur activists are all deranged freaks.

Also fictional works that take place in the past, or in places like modern Russia, do not assume Viewers Are Morons, and do have people wearing fur, since they are/were common in those places and times. Yet those works still seem to portray those places and times as less enlightened, with wearing fur being a symptom of this. And in Politically Correct History, wearing fur seems to disappear, even in the dead of winter.

Also, this can actually be combined with Pretty in Mink. This is when a character wears real fur, but the character still fits the type mentioned. Works that are explicitly this trope just use fake fur.

One of The Newest Ones in the Book.

No relation to the CSI episode of the same name, or its subject.

Examples (examples for Cruella to Animals should go there):

Realmwalker has Luideag, an evil loch monster who wears a baby seal fur stole that is actually a baby selkie's pelt