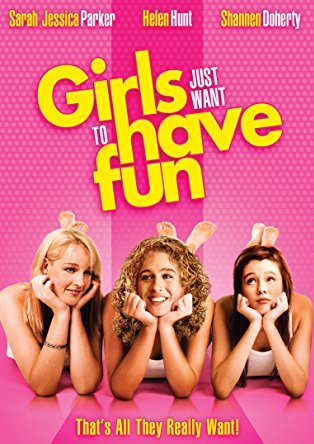 A 1985 teen comedy film about a girl named Janey, whose family has just moved to Chicago. The one bright spot is that Chicago just happens to be the location of her favorite show, Dance TV, on which she dreams of performing. When she finds out there is a contest to appear on the show, she enters despite her overprotective dad. With her dance partner turned love interest, her best friend, and lots of music from The '80s, she sets out to win the contest, best her rival, and finally win her father's approval.

The film didn't have much star power to drive it. At the time of release, the top-billed cast members were Biff Yeager (in the minor role of Jeff's father) and Kristi Somers (in the even smaller role of Rikki, the Dance TV music news reporter). This is probably at least part of the reason why didn't make back its moderate budget. On the other hand, that fact allowed it to be aired on cable very inexpensively, giving it a cult status.

It was also some Paying Their Dues roles for several actors, including Sarah Jessica Parker, Helen Hunt, Shannen Doherty, and Jonathan Silverman.

Girls just wanna have these tropes: