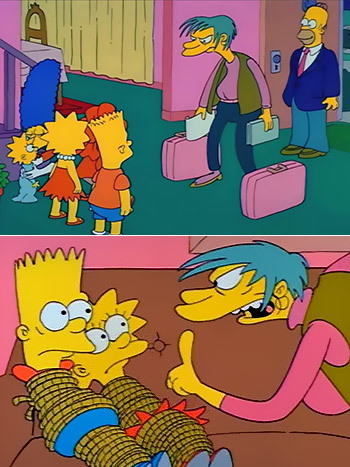 Know the difference between a kidsitter and a kidnapper?
Rosalyn: Calvin, take a look by the telephone and tell me what you see.
Calvin: A note Mom left with emergency numbers.
Rosalyn: Right. Now, you wouldn't want me to have to CALL any of those numbers, would you?
Calvin: Well, it must be 6:30. I guess I'll turn in.
— Calvin and Hobbes
Advertisement:

While becoming a Badly Battered Babysitter may be an adult's worst nightmare, having a Babysitter from Hell is a child's.

In Real Life, child abuse by a temporary or hired guardian is a very serious thing. But in fiction, it can be comedy gold. It's also a good way to give a character a Dark and Troubled Past that's only just dark enough, without making the parents out to be bad. A common fate of characters with a Hilariously Abusive Childhood.

This villain type is always introduced the same way: parents need someone to care for their children. Often, possibly because either a parent or child has a bad reputation, short notice, or bad timing (who'd have thought they'd schedule the high school prom and the elementary school PTA meeting on the same night?), the parents are left with few choices.

The Babysitter from Hell is often a Jerkass at Your Discretion, only revealed for what they are after the parents leave. Usually this character can be identified by at least three of the following traits or behaviors:

To meet the requirements for this trope, all of the following must be true:

With no support from adults, the child is usually forced to take unilateral action to either foil or prank the babysitter. When the parents return, either the Babysitter from Hell has already left or blames anything the parents find amiss on the child. Since the parents usually don't believe the child, the threat that they will be back remains.

This is a villain type where on the Sliding Scale of Antagonist Vileness the Babysitter from Hell can range from pure evil to a Jerkass Woobie with a Dark and Troubled Past of their own, and Alternate Character Interpretation may allow some to be regarded as both.

At the end of Day 2, Willy and Brianna spend the evening with Alicia, a repulsive babysitter who's human form is just a disguise for something worse.

At the end of Day 2, Willy and Brianna spend the evening with Alicia, a repulsive babysitter who's human form is just a disguise for something worse.