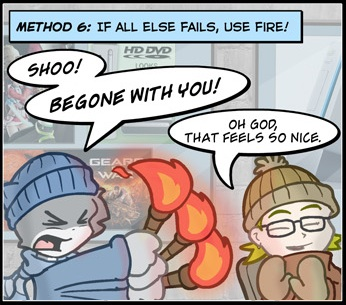 Note: Some enemies may be immune to fire damage.
Calvin: Pack snowballs! Maybe we can knock him out!
[Calvin and Hobbes throw snowballs at the snowman creature]
Hobbes: The snowballs just stuck to him!
Calvin: Look, it's given him an idea!
Hobbes: He's packing more snow onto himself!
— Calvin and Hobbes
Advertisement:

This is for when something that is used against a particular character is either beneficial and/or pleasant to that character, or at least perceived by that character as such.

See also Shooting Superman, where rather than backfire it does what the audience expects: nothing. Not to be confused with Self-Damaging Attack Backfire, which is when an attack hurts the attacker.