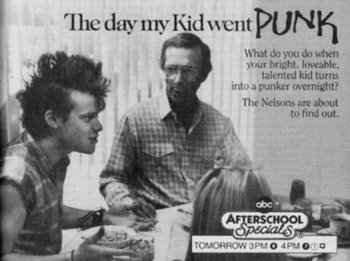 Well, when you spend all your time at sea on a cruise ship, these things will happen.
"Punk is nothing but death and crime and the rage of a beast!"
— Batman: Fortunate Son
Advertisement:

Every youth subculture gets its moment to be The New Rock & Roll — greasers, mods, hippies, skinheads, goths; hell, Mystery Science Theater 3000 proves that even the beatniks got a good round of it. And when the late '70s and early '80s came around, the punks got it with both barrels. The subculture relied on brilliant and strange hair and clothing styles, a growing feeling of societal discontent and marginalization, and simple, raw-sounding, angry music. It was a veritable license to sow revulsion and panic among the Moral Guardians of the day.

But whereas the general societal backlash to a subculture tends to abate over time, there's still this idea, decades later, that punk is violent and nihilistic. Maybe it's the pervasive nature of the imagery. Maybe it was the hardcore seeding of memetics that painted punks as people who wanted to tear the system down and piss on the ashes. Or maybe it was because Sid Vicious ruined it for everyone.

Hence, the Quincy Punk. The Quincy Punk looks for all the world like a stereotypical punk — mohawk in all the colors of the Kool-Aid rainbow, studded leather jacket, and very uncomfortable piercings. The music he listens to is distorted and raw, like hardcore on PCP, and often doesn't much resemble actual punk rock. He's an anarchist, but it's more about setting fire to a police station than any sort of rational opinion on Kropotkin's Mutual Aid. Oh. And he hates you. The Quincy Punk is most often used as a stock mugger, thug, or street tough for superheroes or other urban vigilantes to beat the shit out of, allowing for an intimidating image in an urban setting while avoiding the Unfortunate Implications of Batman (or some other Super Hero or Action Hero) beating up more “ethnic” or racially-oriented street criminals. A post-apocalypse setting will likely be infested with punks as a sign of how lawless and desperate the world has become.

Later works occasionally feature the "hardcore bro", who, while differing in attire (usually preferring band shirts or sports jerseys, snapback hats, skate shoes, buzzed hair, and gauged earlobes), acts largely the same: rude, obnoxious, aggressive, and prone to violent and destructive behavior for stupid, petty, and often nonsensical reasons. Portrayals of the latter are most likely influenced by the behavior of FSUs

, short for "Friends Stand United" or "Fuck Shit Up" depending on who you ask. They started out as a legitimate (albeit extremely violent) anti-racist Straight Edge group who aimed at driving neo-Nazis and drug dealers out of Boston's Hardcore Punk scene, before gradually devolving into one of the nastier real-life examples of this trope, becoming infamous for invading shows, starting fights, and staging multi-man ambushes on disliked individuals to the point where the FBI eventually declared them a street gang in 2009. Many of their early members eventually wound up in biker gangs.

Punks themselves are also likely to cite the "trusty crusty" or "oogle", somebody, usually a young white man, with a substantial trust fund who embraces the crust punk lifestyle while cherrypicking the most superficial aspects of it. This usually entails voluntary homelessness, deliberately attempting to become as filthy and repulsive as possible, and excessive drug and alcohol usage juxtaposed with obnoxious moral grandstanding, often while secretly falling back on their trust funds whenever their efforts to generate income (typically through panhandling, busking, or bottle returns) or dumpster diving turn up short (or when they spend all of their money on alcohol and drugs), all while being completely and utterly blind to their own privilege.

Incidentally, Emo Music grew directly out of this trope, or more specifically, as a backlash against it. The roots of emo go back to the "Revolution Summer" in the Washington, D.C. punk scene in 1985, when a group of musicians led by Minor Threat vocalist Ian MacKaye clustered around Dischord Records felt that the scene had been overrun by violence, sexism, and people who came to shows just to fight in the mosh pit. Joining the Post-Hardcore scene, their more melodic sound and personal lyrics became an important forerunner to emo.

For actual information on Punk rock, see Punk or the Punk Rock page. Nothing to do with President John Quincy Adams, unless some tell-all biography reveals his youthful radicalism. There's now a book out that's a field guide to these sorts of portrayals, paired with the rare cases where the creators actually knew what the hell they were doing.

Not to be confused with the actual clan of Quincies from Bleach. Or one of the first suburbs Southies escaped to.