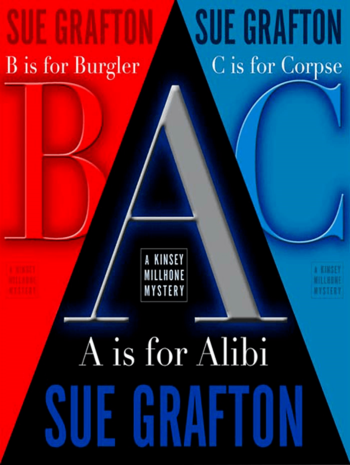 Kinsey Millhone is a series of mystery novels sometimes referred to as the 'Alphabet Mysteries', created by Sue Grafton. They follow the titular Kinsey Millhone, a private investigator in the fictional Santa Teresa, California. Reportedly: "Kinsey is 5'6" and weighs about 118 pounds. She has short, dark, thick hair that she trims with nail scissors, being generally uninterested in her physical appearance."
Advertisement:

Each book is named for letters of the alphabet, the final one being "Y" is for Yesterday. The series began in 1982 and ended in 2017, though in universe only six years had passed. The final book was to be published in 2019; it would have been called "Z" is for Zero and have taken place in 1990. Sadly, Grafton's passing in December 2017 (and lack of interest in working with a ghostwriter) meant that Y would be Kinsey's final adventure.