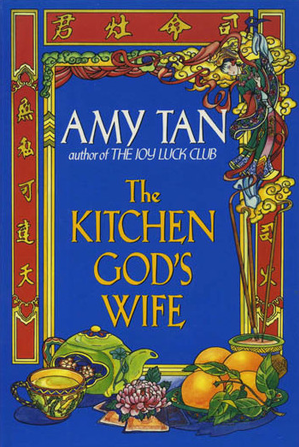 The Kitchen God's Wife is a novel by Amy Tan, and, like most of her works, is a novel about Chinese-American female identity.
Advertisement:

The first few chapters follow Pearl Brandt, a Chinese-American in San Jose, California, as she describes her "family" - her American husband and two daughters, her mother Winnie, her overbearing Aunt Helen (who is supposedly Winnie's sister-in-law or something; she and Winnie have kept each other's secrets for a long time), and the rest of Helen's family as they prepare for, first, the nth engagement party of Pearl's obnoxious cousin Bao-bao, and then the burial of her Great Aunt Du. Pearl and her family see these obligations as a chore, presumably because Pearl herself is immersed in her American identity. They go anyway, and it's revealed that Pearl has multiple sclerosis (something she has told Helen, but not her own mother). Helen tells her she has a brain tumor and that she refuses to die without Winnie knowing about Pearl's sickness.

Meanwhile, Helen also tells Winnie that she must tell her estranged daughter her own Dark and Troubled Past herself, or Helen will tell her herself.

At that point, the narrative switches to Winnie's point of view as she details her life to Pearl - her time as a daughter of a wealthy man's lesser wife, how she was sent to her uncle after her mother's disappearance, and the story of how she survived both her first terrible marriage and World War II.