Rape Is a Special Kind of Evil 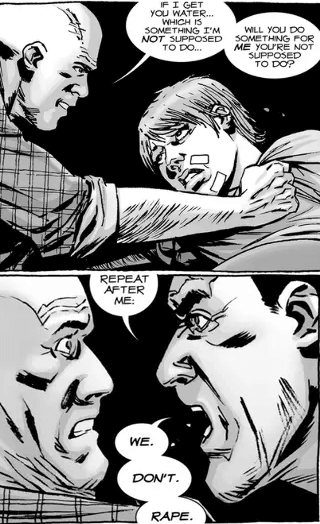 In many works of fiction, especially situations of Rape as Drama, rape is not merely bad; it's a qualitatively different level of evil. As such, a rape scene can be used as a Kick the Dog moment for a particularly evil character, or as the point where a character who previously was merely unlikeable crosses the Moral Event Horizon into monster territory.

Note that not only is rape considered a game changer for almost all characters, but it is also so for the writer. Many stories and Crapsack Worlds have monsters who don't commit rape, even though everything about their character indicates they could, would, or should. There are also times when rape is kept "off camera" or otherwise something in the past, or hinted at once and never brought up again. Having rape in a story will immediately plunge it into the darkest and edgiest abyss of all that is Darker and Edgier. If they don't portray the rape as dark enough, then Values Dissonance (and thus the most scathing criticism from the audience) will happen.

A sub-trope of Even Evil Has Standards when rape disgusts a villain. Compare Wouldn't Hit a Girl, Wouldn't Hurt a Child. Contrast Black Comedy Rape. Related to the idea of rape as a Fate Worse than Death. When refusal to engage in this is a sign of the good guys superiority it is The Women Are Safe with Us.

Woe betide a rapist who is caught by a Wife-Basher Basher: The results are NOT pretty.