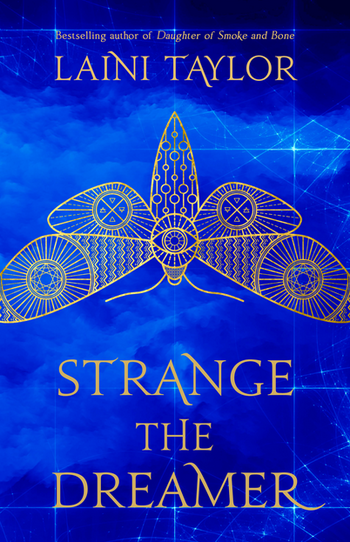 Strange the Dreamer is a Young Adult fantasy book written by Laini Taylor, author of the Daughter of Smoke and Bone trilogy. The book centers around the adventures of Lazlo Strange, an orphan and apprentice librarian who has dreams of someday traveling to the Unseen City, a mystical metropolis where all wonderful things like magic exist. But when he actually comes to the city, known as Weep, he realizes that there is so much he doesn't know about this strange world. Meanwhile, a girl named Sarai lives a life imprisoned and away from humanity, but she longs to escape and be apart of the world... if only that was possible.
Advertisement:

Strange the Dreamer was released in March of 2017, part one of a planned duology.

WARNING: Due to the slowly-unraveling structure of this story, there will be unmarked spoilers ahead. Read with caution!