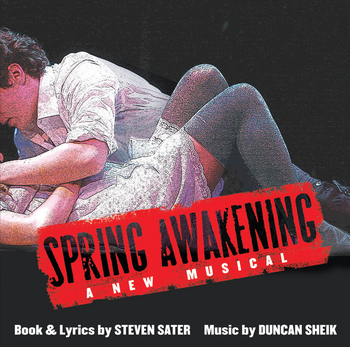 "You watch me, Just watch me,
I'm calling. I'm calling, and one day all will know."
— Melchior; "All That's Known", "The Bitch of Living", "Those You've Known"
Advertisement:

Spring Awakening was originally a play written by Frank Wedekind in 1891, and the Broadway musical based on said play was written in the 21st century. The musical features music by Duncan Sheik and lyrics and book by Steven Sater. The original play was very controversial to audiences of that time period due to explicit sexual content, and didn't have its first production until 1906 in Germany. It wasn't introduced to the United States until 1917, when it premiered in New York City. It was nearly shut down due to it being a "pornographic work." The musical version premiered in New York off-Broadway in May of 2006. It then moved to Broadway in December 2006, and became a financial success. It closed January 19, 2009, after 888 shows.

In 2015 the show was revived when prominent Deaf theater company Deaf West transferred their production to Broadway. This version, directed by Michael Arden, made several of the characters deaf and incorporated American Sign Language into the dialogue and choreography. This created an Alternate Show Interpretation. The production had several Deaf performers and included Ali Stroker, the first person in a wheelchair to perform on Broadway.

The show revolves around a group of teenagers, fourteen in the play, of unspecified age in the musical, which is made confusing with the frequent usage of Age-Inappropriate Dress. Melchior is a rebellious bad boy and proud atheist who hates the authority figures in his life. Moritz is Melchior's nervous wreck of a friend, anxious about his school work and ashamed of his sexual feelings. Wendla is a naive but curious girl who develops feelings for Melchior.

Not to be confused with Catapult Nightmare.