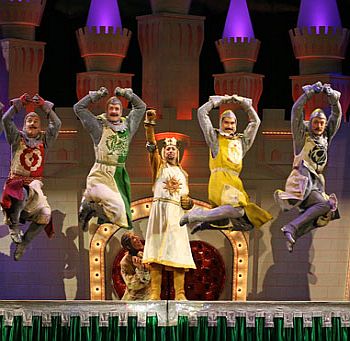 We dance well here in Camelot.
"We're Knights of the Round Table
We dance whene'er we're able
We do routines and chorus scenes
With footwork impeccable."
— Monty Python and the Holy Grail
Advertisement:

Dancing in a suit of armour. An amusing sight, in part due to the inherent clumsiness and difficulty in moving glibly in such attire, though far less so than one might expect, as the Real Life section would suggest. Furthermore, a suit of armor has connotations of knightly bravery and honor—hence the humorous whiplash stemming from dancing in full plate (see also The Comically Serious).

Not to be confused with Dance Battler. The title is also a Pun on the 1997 film Boogie Nights.

Oh, on second thought, let's not go to Camelot. It is a silly place.