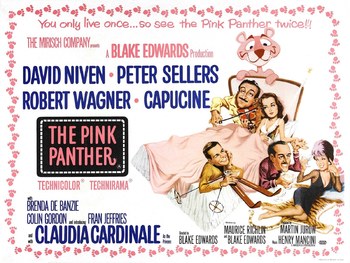 As a child, Princess Dala (Cardinale) was given the incredibly valuable "Pink Panther" diamond as a present by her father, the shah of Lugash. Eventually Dala was forced into exile after her father's death and the takeover of her country by a military junta. Now she's living in high style at a ski resort in the Italian Alps, but the Lugash government maintains that the diamond belongs to the country and wants her to give it up. There's also a mysterious jewel thief, "The Phantom", who is believed to be after the Pink Panther. Inspector Jacques Clouseau (Sellers), of the French Sûreté, is on the trail of the Phantom and has come to the resort with his wife Simone (Capucine) in the hope of catching the elusive thief. Luckily for the Phantom, however, Clouseau is an idiot bumbler.

Meanwhile, charming English gentleman Sir Charles Lytton (Niven) is also staying at the ski resort. Sir Charles becomes smitten with the gorgeous Princess Dala, who falls for him in return. What Dala doesn't know is that Sir Charles is the Phantom and is after the Pink Panther. And what Clouseau doesn't know is that Simone is Charles's lover and his partner in crime. Things are complicated further when Charles's American nephew George (Wagner) shows up at the resort unexpectedly, looking for money from his rich uncle.

Started one of the most famous movie franchises of all time. First of six "Pink Panther" films starring Sellers, whose Inspector Clouseau became the Breakout Character and the focus of the series starting with the second film, A Shot in the Dark. There was a misbegotten seventh film (Trail of the Pink Panther) produced two years after Sellers' 1980 death using outtake footage, two more films in 1983 and 1993 that also bombed, and finally a reboot starring Steve Martin, with two films in 2006 and 2009. In addition to all those movies, the opening credit sequence inspired the last great series of The Golden Age of Animation, The Pink Panther cartoon series.