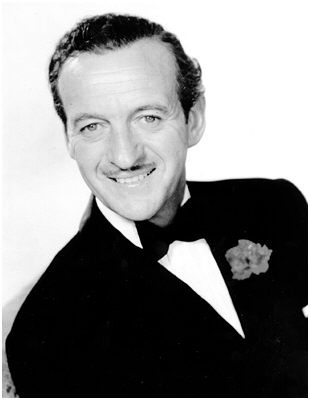 "I see my purpose in life as making the world a happier place to be in."
Advertisement:

James David Graham Niven (1 March 1910 – 29 July 1983) is mostly famous for being, by a considerable margin, the most English man ever to go to Hollywood.

Before becoming an actor, Niven was an officer in the peacetime British Army. He was just making the leap to movie stardom in 1939 when World War II started; Niven rejoined for the duration. A measure of his popularity and success is that after seven years of war, during which he appeared in only two films (both government-sponsored propaganda pieces), he was still the second most popular film star in Britain. It was probably the mustache.

In most of his films Niven played a somewhat effete British gentleman, and looked somewhat out of place in his occasional action roles, which is odd since in Real Life he spent much of the war as a commando, and even rose to the rank of lieutenant colonel.

Ian Fleming considered him the ideal actor for the role of James Bond, and he did play him, although that was in a parody film.

Anyone interested in the Golden Age of Hollywood should read his memoirs, The Moon's a Balloon and Bring On The Empty Horses.

Tropes associated with David Niven's work in film and books and with his appereances in media: