No More for Me 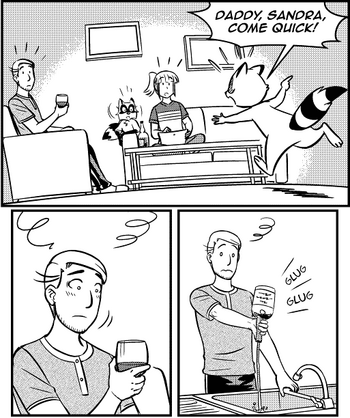 Some startling, extraordinary event occurs, and a bewildered spectator (archetypally, a lone tramp with a bottle) decides that some consumable they're working on is causing hallucinations, and promptly throws it away or pours it out on the ground. They might also take a vow of sobriety out loud (often with one hand raised), or write down a pledge to stop drinking or drugging.

If the person realizes their eyes and/or mind are not playing tricks on them, they may either recant or find a loophole in their decision.

Where this trope originated isn't clear. "Taking the pledge" to stop drinking alcoholic beverages certainly dates back to the Temperance movement of the late 1800s, and it likely became a joke as a put-down to that movement. However, it's less clear why the joke involves having hallucinations be the trigger for this action. It may be a throwback to the time of Prohibition, when poorly-brewed alcoholic drinks often contained methanol, which can cause brain damage and blindness. Or to the Great Depression, when alcoholic bums often resorted to drinking Sterno which also contains methanol. It might also come from the (incorrect) idea that the disorder called "delirium tremens," which often includes hallucinations, is a symptom of drinking too much. note In fact "the DT's" is basically alcohol withdrawal - it happens when a heavy drinker stops drinking, not when they've had too much.

As one of those "old-fashioned" comedy gags, it's rarely played straight nowadays, largely being replaced by Stoners Are Funny. Contrast I Need a Freaking Drink (where the situation will make someone on screen turn to drinking). A Sister Trope to Mistaken for Bad Vision, when that trope occurs without alcohol.

Compare with Acid Reflux Nightmare, where someone swears off consumption of something after it gives them bad dreams.

Alternative Title(s): No More Alcohol For Me