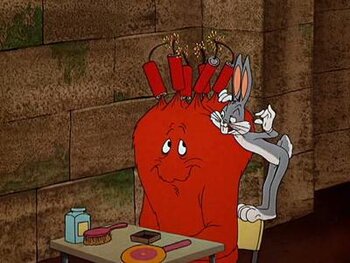 "Now I've gotta give an interesting old lady a manicure, but I'll be back before you're done".
Advertisement:

"Water, Water Every Hare" is a 1952 Looney Tunes cartoon directed by Chuck Jones, starring everyone's favorite trickster rabbit, Bugs Bunny. It is also the second appearance of the then-unnamed Gossamer, who is referred to as Rudolph here, and also features an unnamed Mad Scientist who would later be named Dr. Moron.

One night while Bugs Bunny is sleeping, a rain occurs and floods his hole, causing him to be carried out onto a river leading to the castle of an evil scientist, who captures him with the intent of removing the rabbit's brain and placing it in his recently-created robot. However, once Bugs wakes up and realizes where he is, he escapes in a panic, prompting the scientist to send in his assistant Rudolph to bring Bugs back to him. Soon enough, Hilarity Ensues.