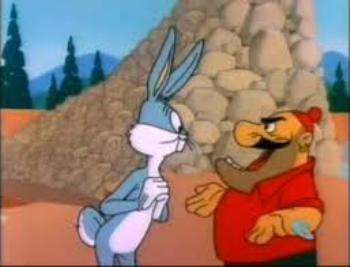 While taking a shower under a waterfall, Bugs is unpleasantly surprised to find the water drying up on him. He briefly worries that the water is simply gone, but then concludes that it’s probably the fault of beavers damming the river upstream. He goes to confront the beavers, but instead finds the villainous lumberjack Blacque Jacques Shellacque building an illegal rock dam in order to control the water supply and profit off the scarcity. Bugs removes a large rock at the top, which Jacques prompty replaces. He then asks what would happen if a little rock at the bottom of the dam became dislodged. Jacque is so eager to show that his dam is solid that he removes a small rock himself, and the whole thing comes crumbling down.

Bugs’ shower is again interrupted by the dam, which Jacques has rebuilt stronger. Standing on top of the dam Jacques sees a shark fin. He assumes this to be another trick by Bugs and goes out to meet it with a knife in his teeth. It turns out to be a real shark. Bugs saves Jacques from the predator but at the same time crashes a log boat through the dam, destroying it again.

Jacques builds a third, even bigger dam. Bugs throws a stick of dynamite at it, which Jacques easily catches. It blows up in his face, of course, and Jacques doesn’t notice an entire raft full of dynamite heading for the dam.

Jacques follows the sound of Bugs’ singing voice to the waterfall and hits what he thinks is Bugs with a rifle blast. Instead he’s destroyed Bugs’ Victrola, enraging the rabbit. Finally he builds another dam, this time out of steel. This time his own supply of water has been cut off, by a dam that Bugs built. Jacques destroys a series of dams that Bugs has built while Bugs begs him to stop. Finally he gets to the Grand Cooler Dam, which he tries to destroy with a cannonball. The cannonball ricochets, plowing into Jacque and knocking him into a police van that drives him away. Bugs says that he’s sure he’ll see Jacques again, “In, uh, about 20 years."