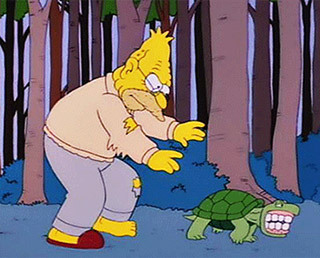 60 years on, Achilles was still going.

The High Speed Chase Scene has been a staple of action movies for decades, and the most obvious way to parody it is to remove the "high speed" part, and have the action take place below 5mph.

With that simple change, all the usual staples — the Sheet of Glass, the Lemming Cops, the Wronski Feint — become ridiculous, while tropes like Slo-Mo Big Air and Every Car Is a Pinto become downright surreal. Expect heaping helpings of Overly Long Gags as characters desperately brace for an impact that's a long time coming. Relies heavily on Mundane Made Awesome, and usually an Unconventional Vehicle Chase.

While it might be hard to believe, a dramatic variant also exists. Just make the pursuer a terrifying Implacable Man with an Ominous Walk and the pursued a broken wreck trying to crawl away from a No-Holds-Barred Beatdown. Or make the two persons extremely injured or tired, as a variation of Combat Breakdown. This has to be done carefully, or it can easily slip into Narm territory.

Note that Slow Motion chases don't count — the characters should actually be traveling at that speed. Also see Slower Than a Snail.

In a parody of the infamous O.J car chase, Cartman attempts to escape to Mexico in Kenny's "Go-Go Bronco" toy car.

In a parody of the infamous O.J car chase, Cartman attempts to escape to Mexico in Kenny's "Go-Go Bronco" toy car.