Western Animation / The Wabbit Who Came to Supper 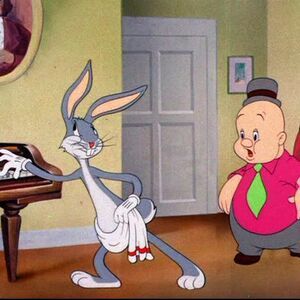 "The Wabbit Who Came to Supper" is a 1942 Merrie Melodies cartoon, directed by Friz Freleng and starring Bugs Bunny and Elmer Fudd (in one of only four cartoons where Elmer is shown as a fat man).

The cartoon starts with Bugs on the run from Elmer Fudd and his hunting dogs, ending with him getting cornered near a tree. But by chance, a mailman arrives on a scooter and delivers a telegram to Elmer. He reads the letter and discovers that his Uncle Louie is leaving him a $3,000,000 dollar inheritance, but with one catch—if he harms any animals, especially rabbits, he won't get one cent. Ecstatic, Elmer lets Bugs go free, but Bugs has other plans...

"The Wabbit Who Came to Supper" provides examples of: