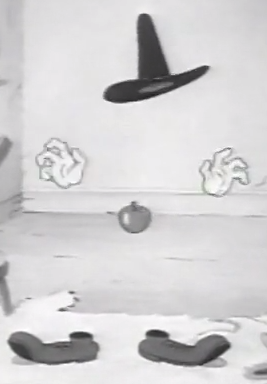 Looks like this guy had an apple for lunch.
"There are details
That I haven't worked out
Like when I eat my lunch
Does it disappear
Or do you see it going all the way down?"
— They Might Be Giants, "I Am Invisible"
Advertisement:

What happens when an invisible character eats lunch?

One possibility is that the food disappears as soon as it enters their mouths. The other possibility is this trope: the food remains visible, even as the character chews and swallows it. This can also apply to translucent or partially-invisible characters.

The food usually doesn't stay visible past the stomach stage. This is partly justified; logic suggests that the food must become invisible as the character absorbs it fully into their body, or else the character wouldn't stay invisible for very long. Then again, the same logic also suggests that the portion of the food that isn't absorbed should remain visible all the way down, but this would be too disgusting for most audiences.

Even with the stomach restriction, the trope is often played for Squick in live-action works. In drawn or animated works it may be Played for Laughs instead.

The trope also illustrates the mechanics of a character's invisibility. Visible food suggests that their body is made of a completely transparent material, as opposed to ordinary material that is "hidden" by an Invisibility Cloak (or something similar).

Can be used as a form of Visible Invisibility. Compare Invisible Streaker, where invisible people have to worry about the visible objects on their body.

This trope presumes the character's stomach can hold physical objects. If a ghost eats something, and it immediately falls through their body and hits the floor, it's not related to this trope.