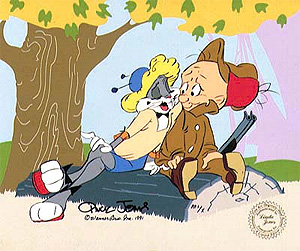 "I would just love a duck dinner."
"Awfully unsporting of me, I know, but, what the hey, I gotta have SOME fun!"
—Daffy Duck in the opening.note "And besides, it's really duck season!"
Advertisement:

The second in a trilogy of Bugs-Daffy-Elmer cartoons known as the "hunting trilogy," the others being Rabbit Fire (1951) and Duck! Rabbit! Duck! (1953). The short revolves around another Bugs, Daffy, and Elmer team-up in which Daffy is trying to save his skin again — only to be foiled by Elmer's typical incompetence again and again.

"No more tropes for me, thanks, I'm driving":