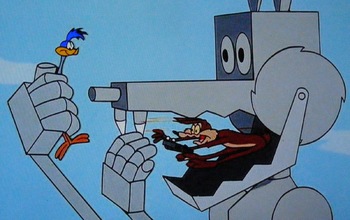 "The Solid Tin Coyote" is a 1966 short starring Wile E. Coyote and the Road Runner.

With a bucket of tar and a mop, the Coyote lies in wait for his prey on the road. When that fails, he test runs a wide mirror at the edge of another cliff, with interesting effects. Ultimately, having moved to the wrong side of the mirror, Wile E. falls into a bathtub lying among the contents of a dump and gets an idea that's sure to catch the Road Runner: build a giant coyote robot. Or so he thinks.

The robotic coyote later made an appearance in Looney Tunes: World of Mayhem, making it one of the few references to the DePatie-Freleng Enterprises era in modern Looney Tunes media. It was also the final weapon used by Wile. E in Road Runner's Death Valley Rally.