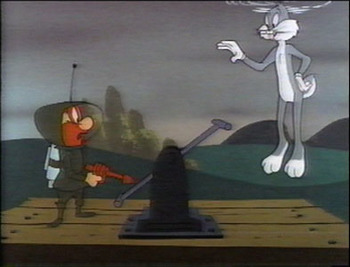 "Toodle-oo!"
Lighter Than Hare is a 1960 Merrie Melodies cartoon staring Bugs Bunny and Yosemite Sam. It was directed by Friz Freleng and features Sam in the unique role of a being from space.
Advertisement:

Yosemite Sam of Outer Space arrives on earth in search of a creature to capture and bring back to his planet, then sets his eyes on Bugs. Unfortunately, he and his team of robots are no match for the rabbit's wits... and his homemade gadgets built from war surplus junk.