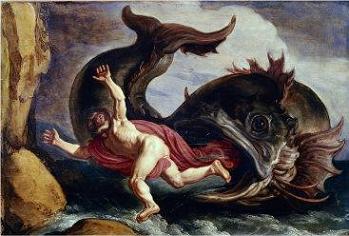 Oh Jonah, he lived in de whale.
We are two mariners
Our ships' sole survivors
In this belly of a whale
Its ribs are ceiling beams
Its guts are carpeting
I guess we have some time to kill
— The Decemberists, "The Mariner's Revenge"
Advertisement:

An extreme version of the Big Eater which is usually fat, usually a monster of some type, eats the hero or some other innocent bystander. But they don't chew, they don't rip the body up into smaller chunks to fit in their mouths — they just swallow the victim whole in one or two gulps.

It's often a fate in settings that feature dinosaurs or kaiju, although in Real Life there are few if any animals who could realistically inflict such a fate on a human.

A Sub-Trope of Eaten Alive. When a character tries to invoke this trope, it is a case of Eat Me.

Compare Just Eat Him and Eaten Alive. May overlap with Just Desserts. If the person eaten gets out alive and not much worse for wear it's Getting Eaten Is Harmless. In video games, can sometimes lead to a Womb Level set inside of the consuming creature.

Contrast Orifice Invasion (when the orifice is the mouth).

Upon the Eternal Water Source being revealed, the Skylander tries to collect it, only for both them and the Source being devoured by the Leviathan.

Upon the Eternal Water Source being revealed, the Skylander tries to collect it, only for both them and the Source being devoured by the Leviathan.