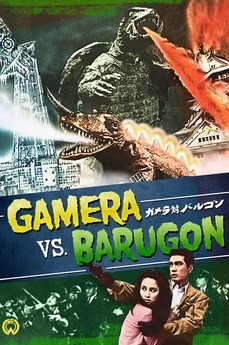 "Why? Why must men be so greedy?"
—Keisuke, reflecting on his part in Barugon's rampage.
Advertisement:

The second movie in the original Gamera series, and easily the most adult, Gamera vs. Barugon was created as an A-list picture by Daei studios after the success of Giant Monster Gamera. It was released in 1966. It stars Kojiro Hongo in his first Gamera film, and it has a music score by Chuji Kinoshita. Originally envisioned as a movie where a race of aliens with freezing technology take over the Earth before Gamera escapes the rocket and returns, the freezing powers were eventually given to the monster Barugon after some rewrites. This film is the most comparable to the Godzilla series, as it is the only film in the Showa era which lacks a child among the cast. It (arguably) also has two of the most realistic human brawls ever seen in a kaiju movie. Also unlike the other films in the series, Gamera vs. Barugon was directed by Shigeo Tanaka, with Noriaki Yuasa helming only the special effects.

For the Mystery Science Theater 3000 episode see here. Not to be confused with War of the Monsters.

Alternative Title(s): War Of The Monsters