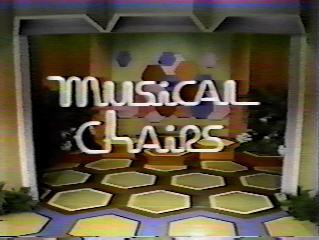 "Let's play a game of Musical Chairs / and give ourselves a round of applause!"

Short-lived Game Show hosted by singer Adam Wade that ran on CBS in 1975. Four contestants competed to guess the next line (from three choices) of a song performed by Wade or one of several guest vocalists; alternately, the players had to name the film it was composed for or who sang a particular version of a song, again from three choices. Much like Split Second, the players locked in their answers and were called on in the order they did so.

Three songs were played in each round, and the contestants scored money for correct answers...but there was a limit: the money ($50 in Round 1, $75 in Round 2, and $100 in Round 3) was awarded to the first three correct answers, then the first two, and finally the first. Round 3 was the elimination round, where the lowest-scoring player after each song was eliminated from play, and the winner (who had to give a correct answer when there were only two players remaining)...well, see below. It got a bit confusing.

In September or October, the rules were altered to use the aforementioned payout structure for the three songs of each round ($50/first three, $75/first two, $100/first), and the player with the lowest score after each round was eliminated. The redistribution of money didn't make any real difference, though, since $675 was still the maximum.

Musical Chairs debuted June 16 at 4:00 PM (the "death slot") against the ailing Somerset on NBC and the insanely-expensive The Money Maze on ABC. Maze went into repeats on June 30 and was replaced on July 7 by the return of You Don't Say!. These and frequent pre-emptions resulted in Chairs ending on October 31, and CBS shoved the ailing Give-n-Take to the slot.

Regardless of this and its relative obscurity today, it holds a notable place in the genre as being the first game show hosted by an African-American. It is also notable for having a lot of high-quality musical guests, though that's probably because the show was co-produced by Don Kirshner.