Series / Nanny and the Professor 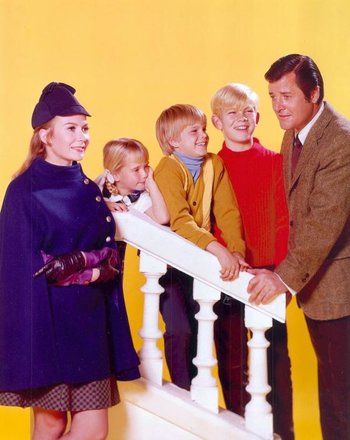 Juliet Mills in "Nanny"'s distinctive cape and hat, with the rest of the core cast
Advertisement:

This ABC sitcom, originally broadcast in 1970–71, centered on the mixture of chaos and order engendered in the house of a college professor by the apparently supernatural abilities of the nanny he'd hired to watch over his children.

Juliet Mills played Phoebe Figalilly, caregiver to the three children of Professor Harold Everett (Richard Long). "Nanny", as everyone called her, was gifted at the very least with classic TV Psychic Powers, which mostly manifested as clairvoyance and even limited omniscience. She used these abilities indiscriminately with the Everett family, enchanting the children and confounding the strictly rationalist professor.

Much of the comedy in the show came from the collision between Nanny's casually mystical style and the more mundane world around her. Unlike most of her counterparts in the other fantastic comedies of the era, she apparently felt no need to hide from the muggles, exercising her abilities so blatantly that it often left witnesses confused or disbelieving. This was made worse by the clever way in which no-one ever actually saw her do anything magical; things just happened in the way she wanted them to, to the accompaniment of a few notes of music in the background (which the characters couldn't hear). This didn't stop the Everetts from suffering the attention of at least one Nosy Neighbor, though.

Despite the apparently low-key "magic" available to her, the series implied that Nanny may have been far more than just an attractive British woman with ESP. Hints were dropped suggesting that she was something other than a simple human, with a lifespan measuring in the centuries; unfortunately, the series ended well before it could pay off on those clues, leaving frustrated viewers to speculate on just what Nanny was, and why she watched over the professor and his family.