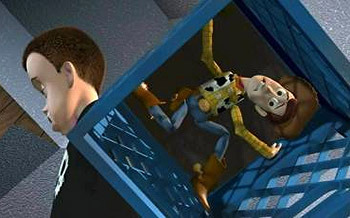 The hero is hiding under a box. The villain is coming closer and closer. He's going to get caught. The villain lifts up the box and... huh? Where'd he go?

Then the camera shifts. The hero is actually wedging himself inside the box to avoid detection. Usually an Animated Trope. Of course, there's Fridge Logic involved. The character lifting the box should notice that it is a whole person heavier than it was but doesn't. Behind the Black is in there somewhere too.

Compare: Shell Game, Gone Behind the Bend, Behind a Stick, Ceiling Cling, and Underside Ride.