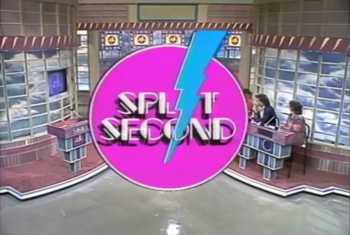 Is it true that TV Tropes Will Ruin Your Life? You'll find out, as one of these three contestants wins the chance to drive home in a brand new Pontiac Grand Am... in just a... SPLIT SECOND! (thunderclap)
Advertisement:

Game Show produced by Stefan Hatos-Monty Hall Productions for ABC from 1972-75. Host Tom Kennedy presented a three-part question to three contestants, and the order in which they rang in determined who answered when. The first player to ring-in got to choose an answer; the two others had to choose from the unclaimed answers. After all three players answered, they were awarded $5 each if all three were right, $10 each if two were right, and $25 if only one was right. The first two rounds consisted of 10 questions each, and Round 2 doubled the cash awards.

The third round was the Countdown Round. The leader after Round 2 had to give only three correct answers to win; the second-place player, four; and the third-place player, five (the Monty Hall version increased these numbers to four, five, and six, respectively). In this round, the player in control was allowed to continue answering the same question until either reaching zero (which automatically ended the game) or failing to come up with a correct answer (after which, any remaining players could complete the question with what was left). All three players got to keep the money credited to them.

After a three-year run on ABC, the show was revived for syndication (distributed by Viacom) in 1986 with Monty Hall taking the role of emcee because he was displeased with the strict judging on Kennedy's version. The revival, which taped in Toronto, had increased cash awards and a different bonus round. Canadian GSN equivalent GameTV has rerun this version, and it was announced in September 2019 that Buzzr had picked up reruns.

The last attempt was in 1990 by Ralph Edwards-Stu Billett Productions, with Entertainment Tonight anchor Robb Weller as host and another different bonus round. In November 2022, Game Show Network announced it would produce a revival, this one with a $10,000 top prize.