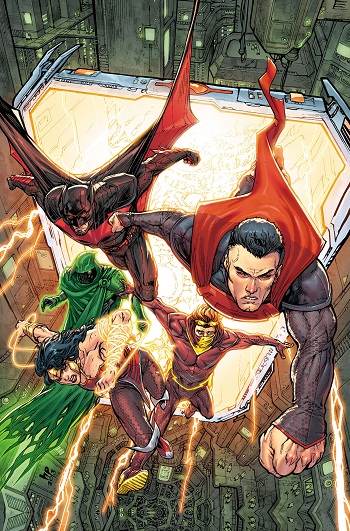 Justice League 3000 is an ongoing DC Comics series that launched in December 2013 as part of the New 52. The series is written by Keith Giffen and J.M. DeMatteis, the writing team behind the original Justice League International.

Set in the year 3000, the series features new incarnations of Superman, Batman, Wonder Woman, Green Lantern and The Flash. This new League, flawed clones of the originals, have been brought to the future by Cadmus in an attempt to restore an era of peace shattered years ago by an enemy known as "The Five".

Relaunched post-Convergence as Justice League 3001 the book was sadly cancelled in 2016, ending with an abrupt cliffhanger. Fortunately it was thankfully resolved by the same creative team in Blue Beetle (Volume 9) #12-13.