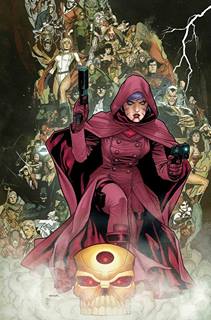 She's on a mission...
Advertisement:

Trinity of Sin: Pandora is an ongoing series in the New 52. It follows Pandora, the innocent woman who opened the box and released the Seven Deadly Sins to the world. Because of this, she was summoned to the Rock of Eternity for judgement by the council of wizards. Cursed to be immortal and undead as punishment, she walks the Earth trying to find a way to defeat the Sins for good and redeem herself.

Pandora was one of the people who created the New 52. In the last issue of Flashpoint, she appeared to The Flash while he was trying to fix the DC Universe timeline and told him to merge the Vertigo Comics and WildStorm universes with it. As a result, she makes a cameo in the background of almost every first issue of a series in the New 52.