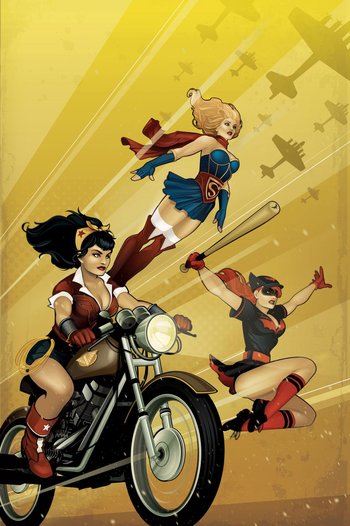 Inspired by DC's "Bombshells" line of variant covers and collectible statues depicting their female (and sometimes male) characters in the style of 1940s pinups, Bombshells is set in an alternate universe where all the world's superheroes are women fighting for freedom and justice during World War II.

When the series starts, Kate Kanenote a Shout-Out to Batman's creator, Bob Kane is Batwoman, the masked captain of a female baseball league who moonlights as the protector of Gotham. She is soon recruited by Commander Amanda Waller to join her squadron of Bombshells, a team which makes use of "unexpected and unsuspected resources," thrusting her into a world of WWII-era intrigue and espionage.

This series is written by Marguerite Bennett and illustrated by rotating artists, some of which include Marguerite Sauvage and Ming Doyle.

The series ended in 2017 after 100 digital chapters, but was immediately relaunched as Bombshells United, still in the same continuity but with a new focus on the darker side of the Allies' real-world actions during the war. That series was cancelled after only thirty-eight digital chapters the following year.