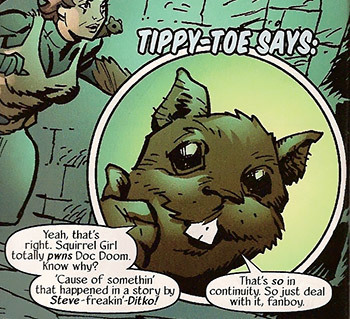 As proven by a talking fourth-wall-breaking squirrel.
"The late James F. Bowman was writing a serial tale for a weekly paper in collaboration with a genius whose name has not come down to us. They wrote, not jointly but alternately, Bowman supplying the installment for one week, his friend for the next, and so on, world without end, they hoped. Unfortunately they quarreled, and one Monday morning when Bowman read the paper to prepare himself for his task, he found his work cut out for him in a way to surprise and pain him. His collaborator had embarked every character of the narrative on a ship and sunk them all in the deepest part of the Atlantic."
— Ambrose Bierce note from The Devil's Dictionary definition of "serial"
Advertisement:

Originally referenced in Running the Asylum, this trope refers to infighting within the official ranks of a shared-universe franchise, where creative teams will take potshots at each other, using their own stories to undercut, contradict, Retcon, or just plain insult the work of their rivals. Because these are official stories, each volley becomes entrenched in the overall setting.

If the shots just end up tangling the Canon up, then a Continuity Snarl can be the result. Sometimes, the mess results in a Crisis Crossover — which will inevitably become the target of later writers Armed With Canon.

Examples of the Crisis Crossover are active volleys of Canon-fire, as different factions within the companies have a tug-of-war over the "New Direction".

This isn't necessarily bad, often resulting in an Author's Saving Throw. However, in many cases this can give the audience the feeling that they are not witnessing a story, but a vicious argument between various lunatics who are using fictional characters to dress up their shouting at each other. When combined with Fan Wank, this can make the effect even worse, as this often suggests that the story exists solely for one creator to grind an axe with another.

Ship-to-Ship Combat is occasionally a cause. A lesser shade is Depending on the Writer.

Messing with other authors' characters in a large Shared Universe is a potential Flame Bait and may be off-limits as impolite and sometimes prohibited outright: it's almost someone's Player Character, and in settings made for RPG it sometimes is. Conversely, simply asking the original author before using "their" characters in canonical material is a nice and continuity-enhancing practice. Of course, there's a precarious balance between counterproductive doting over prominent characters by their authors or derailing these characters (and royally vexing their authors) without any good reason by Executive Meddling or another author missing the whole point somewhere.

If fans are the ones doing this, it's a Fix Fic. Has nothing to do with Arm Cannons. note We hope.