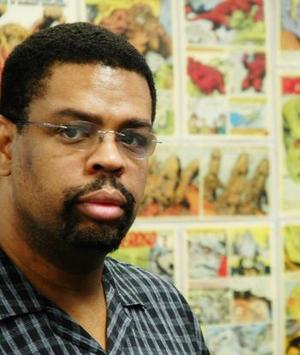 "He’s not dead, he’s up there fixing the sun. And when he’s done he’ll be back, and I’ll be here waiting for him."
— Lois Lane
Advertisement:

Dwayne Glenn McDuffie (February 20, 1962 – February 21, 2011) was an American comic book writer, known mostly for his creation of the African-American superhero Static. Although originating in McDuffie's indie Milestone Comics label, Static eventually moved to the DC Universe, and his creator followed suit. McDuffie wrote for DC Comics, and contributed to various animated DC spin-offs, including Static Shock, Justice League and several Direct to Video movies. He was the main writer and editor for the Ben 10: Alien Force and Ben 10: Ultimate Alien animated series.

Before Milestone, McDuffie also worked at Marvel Comics, where he created Damage Control, a series about the people who clean up the mess after superhero-supervillain battles. Much later, he returned to Marvel temporarily to write Fantastic Four, which had fallen into the hands of an editor who remembered McDuffie's love of the characters from the days when they were both lowly Marvel minions together.

His influence on the DC Animated Universe, starting with Justice League, cannot be understated. While Paul Dini had been responsible for setting much of the universe's tone in the 1990s with his deep and psychological character stories in Batman: The Animated Series and Superman: The Animated Series, McDuffie was the main driving force behind the expansive and epic Story Arcs that came to define the universe in the 2000s.

Sadly and shockingly to his fans, McDuffie passed away suddenly on February 21, 2011 due to complications during a surgical procedure he had the day before. His last work was the script for Justice League: Doom, the animated version of JLA: Tower of Babel. He was 49, having just recently had a birthday a day before his death.

After his death, it was discovered that he is the paternal half-brother of Keegan-Michael Key (of MADtv and Key & Peele fame), but the two never met (or were aware of each other's existence) during Duffie's lifetime. Key elaborates on the circumstances here

Works by Dwayne McDuffie with their own trope pages include:

Other works by Dwayne McDuffie provide examples of: